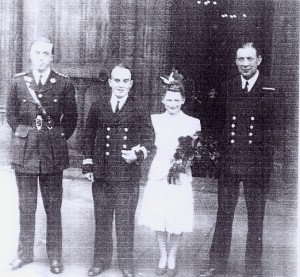 I believe he would have qualified by his service on HMS Dunedin for the WWII medals:

Ordinary Seaman Noel Simmons served in HMS Dunedin from 3rd June 1924 to the 28th August 1925. He was discharged on medical grounds from a knee injury suffered while playing rugby for the Navy team.

At 96 years of age, George was our oldest living Dunedin veteran. Sadly, he died in 2005.

“….My late father, Frederick Pond had served as signalman aboard HMS Dunedin in the 1930’s before transferring to HMS Achilles. His family had emigrated from England to New Zealand in 1929 to settle in Christchurch………”