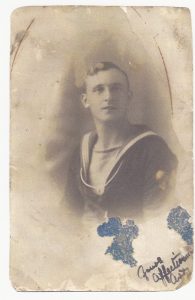 Born on 28th July 1900 in Rotherhithe, Able Seaman Arthur Gray joined the Royal Navy sometime before 1929 and served in a number of RN ships and units (see list below) before joining HMS Dunedin on 6th February 1941. Sadly, nothing is known about what happened to Arthur when Dunedin was hit, but his brother later learnt that a cockney sailor had left one of the rafts, saying “I’m going for a wet”, a cockney phrase for “going for a beer” which Arthur was known to use himself. His family have often wondered whether this was Arthur.

I am grateful to William and Barbara Gray for this information and the photo.