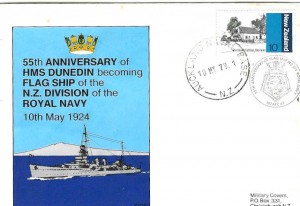 HMS Dunedin spent thirteen of the inter-war years as part of the New Zealand Division. In April 1923, she was one of the ships of the Special Service Squadron, which left for a world cruise, the so-called “Booze Cruise”, which was designed to demonstrate to the world that Britannia still ruled the waves. She sailed from Devonport in the company of HMS Hood, HMS Repulse and four of her sister cruisers, Dragon, Delhi, Danae and Dauntless.

The cruise arrived in New Zealand in April 1924, after an epic voyage taking in Freetown, Cape Town, Durban, Zanzibar, Trincomalee, Kuala Lumpur, Singapore and Australia. HMS Dunedin replaced HMS Chatham on the New Zealand Division, while the rest of the cruise carried on its voyage.

Dunedin’s New Zealand days were a rich adolescence of sun, clear waters and ceremony. Her job – to show the British flag in the Pacific and Australasia – was done with pomp, panache and efficiency.

In September 1930, the ship’s company helped out at the funeral of Henry McNish, the ship’s carpenter in Shackleton’s HMS Endurance.  Shackleton’s Antarctic expedition had ended in the loss of his ship, but he engineered an incredible escape across the ice and in open lifeboats on an epic voyage to South Georgia. One of these boats, the James Caird, was modified by McNish, the ship’s carpenter. Dunedin happened to be in Wellington when McNish died (photo below) and provided a firing party of twelve, and eight bearers at his funeral at 10.00am on Friday 26th September 1930.

Dunedin’s ship’s company gave some practical assistance when she came to the rescue of New Zealanders in February 1931 after an earthquake had struck Napier. In
conjunction with HMS Diomede, she arrived in Napier on 3 February from Auckland with food, tents, medical supplies, doctors and nurses, and stayed until 11
February.

HMS Dunedin twice left the New Zealand station for refits in the UK, once in 1927 and later in 1931, when she was away for seventeen months.

She left for England in February 1937, taking in Tahiti, the Panama Canal and Jamaica before crossing the Atlantic for home waters.