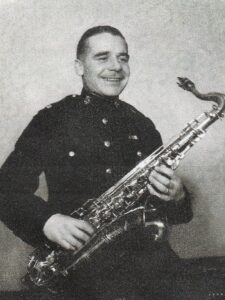 Albert Collins, Royal Marine Musician, was one of only eight Royal Marines to survive the sinking. This photo – supplied to us by Grandson Richard Collins – was taken in Boston in 1942 when he served with HMS Newfoundland. Here is an extract of an email from Richard telling us a little about Albert:

Shortly after the sinking they wasted no time in posting Grandad to HMS Newfoundland. ‘Lucky’ Albert was again bombed off of Sicily and the ship lost it’s steering. Despite that it used it’s propulsion to steer through the Mediterranean, across the Atlantic for repairs in Boston, USA. This gave grandad a chance to learn a new instrument, the saxophone, and he enjoyed six months of ‘swing’ in the US while the ship was under repair. After the war he continued as a musician playing in London theatreland and indeed, in many smaller cities in the UK particularly in the North. He played almost until his dying day when he passed at a ripe old age while living in Newcastle. I enjoyed visiting him with a bottle of ‘Johnny Bells’ whisky which he would drink over the weekend. He was always a cheeky chappie who loved the ladies. We adored him!