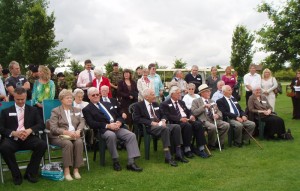 For the first full HMS Dunedin reunion at the Arboretum for three years, more than fifty people gathered on a warm, but breezy, day in Staffordshire to meet four of our survivors and other veterans.

The Arboretum is a different place to the one that Dunedin Society members saw when they last met there in 2006. The trees are maturing and there are more of them across the impressive expanse of land dedicated to the memory of the many men and women lost in warfare. Members could also have a look at the marvellous new Armed Forces Memorial.

Standing proudly in the midst of the Arboretum is our own memorial plinth to the men of HMS Dunedin, around which the Dunedin Society members met in the afternoon for a short service of remembrance and wreath-laying. We were all pleased to see, too, the ever-strengthening Dunedin oak tree that stands to one side of the plinth.

Earlier in the day events had kicked off inside the main hall of the Arboretum with talks and discussions with the survivors. Our four survivors were Bill Gill, Jim Davis, Andrew “Boy” McCall and Bertie Jeffreys (unfortunately, Arthur Binley could not attend this year). We were pleased too to see Ted Hitchins and Richard Laland again, both of whom served in Dunedin prior to November 1941. It was terrific to see so many new members of the Dunedin Society in the room and I am sure they will have listened in awe to the stories told by the survivors about their terrible times on the rafts.

The Society was privileged this year to have former Wren Sandy Holland make her own unique contribution. Sandy is one of those rare people – a woman who served on board one of His Majesty’s ships during World War Two. Yes, in March 1941, as Dunedin sat in dry dock awaiting the completion of her fitting out and repairs, Sandy and a couple of colleagues were drafted in to tidy up the ship’s paper work and put her administrative affairs in order before she sailed for what turned out to be her last departure from England.

In the years since the Dunedin Society has been running, much attention has been paid to the state of the ship herself. Dunedin, launched just as the First World War came to an end, was old by the time she set sail on her World War Two duties in 1939. She certainly had her shortcomings. She was crowded and her equipment was not exactly state of the art. She rattled and shook, too, but the men in the room at the Arboretum remembered her as a happy ship and were proud to say so to the audience. Some descriptions in the official papers suggest otherwise, but the survivors and veterans were having none of it. Good for them.

Key to the discussions with the survivors and veterans were the two new documents that have recently come to light. The first was the second report written by Lieutenant-Commander Watson, the senior surviving officer, who had written his official report to the Admiralty within a few weeks of the sinking. He wrote his additional report later after more time for reflection. The second document was given to us only recently by the daughter of Harold Woodley, one of the sixty-seven survivors (but who has since died) who wrote a vivid account of what happened. Both reports, which paint harrowing pictures of the sinking and what followed, provided much to talk about at the Arboretum.

In addition, we heard from Chris Broadway and Anne Randall; and Michael Gill showed his DVD presentation of past Dunedin events.

Everyone enjoyed the day and one man was heard to say it was the “best ever”. As we have come to expect, the day brought a mixture of emotions and feelings. The members were glad to be together to share in the stories and to hear about the experiences of the men who survived and those who didn’t. The moments of sadness and reflection were mixed, however, with the unique sense of family that the Dunedin Society brings and with the plain enjoyment of chatting and being together. And it wasn’t just about the Arboretum. As usual, members gathered the night before and the night after for drinks, dinner and a jolly good time. Well done everybody.

Special thanks go to Anne Randall for her tireless efforts to keep the show on the road; to Karen Kebby (who couldn’t make it to the Arboretum) for her wonderful work pulling the membership list together and for masterminding the invitations; to Bas Bowyer, “Our Man in Staffordshire”, who keeps a firm hand on the arrangements at the Arboretum and who laid on another superb service at the Dunedin memorial plinth; to Michael Gill for his support and his presentation; to Chris Broadway for his continued inspiration and for being our Master of Ceremonies once again; and, of course, to the men of Dunedin who were at the Arboretum, of whom we are immensely proud and to whom we are so very grateful.

We will see you again, I hope, at the Southsea Royal Naval Memorial on 24th November for our annual service of remembrance.

*Members can have access to the Arboretum site and use the cafeteria facilities before the start and can attend the optional NMA daily chapel service.