“My uncle, James Frederick Loft, was a boy sailor on the HMS Dunedin and lost his life, aged just 17, when she sank. My father, Leslie Stewart Loft, was also believed to have drowned and their parents were notified of the death of both boys. Apparently, my father was transferred to another ship just before she sailed but the General Record Office (see document below) still records my father’s ‘death’ on the Dunedin.” 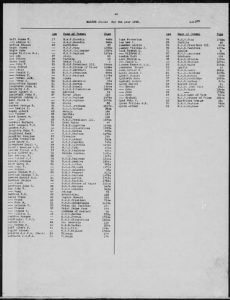