Once again, members of the Dunedin Society gathered at the Portsmouth Naval Memorial, Southsea Common, for our annual act of remembrance. As usual, the ceremony started at 1321 to mark the moment when the first torpedo was fired. We were pleased to see fifty three people members of the Society meet at the windswept – but mercifully rain-free – Memorial to remember and honour the men of HMS Dunedin.

I was privileged to give the opening address at the Memorial:

Sixty five years ago, at this very minute, three torpedoes were sent on their way towards HMS Dunedin as she patrolled alone in the South Atlantic in search of an enemy surface vessel.

The men on board HMS Dunedin knew nothing of what was happening in the sea beneath them, but the repercussions of what happened a few minutes later would reverberate across the years to the point where we are standing here today in remembrance.

We gather here, at this moment, not for morbid or dramatic reasons. We come here because it gives each of us a point of focus every year whether we are at this spot or at Alrewas at the permanent HMS Dunedin memorial, or somewhere quite different, perhaps in a quiet place of our own choosing where we can privately remember and pay tribute to the men whose names appear on these walls behind us and who are on our minds today.

I am one of the lucky ones. My father stands here with us today, one of the survivors of the tragic events that we are commemorating. And with him, I am not only delighted to see Jim Davis and Andrew “Boy” McCall, two of our other survivors, but also Bertie Jeffreys, the latest of the Dunedin band of survivors, who only discovered us this summer. In past years we have been privileged to have with us – here or at other reunions – the survivors Harry Cross, Les Barter, John Miles and Albert Cooke, but sadly we have since lost them. Arthur Binley, our other living survivor, unfortunately couldn’t make it to be with us today.

I am pleased, too, to see several other members of our Society, including Tommy Handley, who was fortunate to leave HMS Dunedin only days before she was hit, and later we expect to see Alan Jarvis, another of our Dunedin veterans and long-term supporters of the HMS Dunedin Society.

It is good to see, too, several new members of the Society, including Ted Hitchins, who served in HMS Dunedin in 1940 and who remembers many of the crew and Ken Tall, whose father, Horace, was lost in the aftermath of the events of 24th November 1941. And we welcome today John Ascoli whose Father was thought to be lost but was hospitalised the day before Dunedin left port for the last time. I know there are others here today for the first time and I welcome you all.

And, as ever, it is good to see again people who have become my good friends in the few years we have been developing the HMS Dunedin Society, and others who – like me – are here on this day for the first time.

Our presence here today and the fact that new members of the Society continue to join us, is testament both to the need to remember loved ones and relatives, but also to the enduring wish for us all to remember the sacrifice made by an earlier generation so that we might live in the freedoms we enjoy today.

I am constantly struck by this power, this unwavering desire to recall and to connect with what happened so long ago, this intensely human need to remember. The HMS Dunedin story is a poignant example of how we all share this need. It has enabled us to build the story from a few fragments of memories and fading photographs into a comprehensive account of how a group of ordinary men served their country and lost their lives for it.

Bit by bit, we have pieced together the story of what happened to Dunedin and her men.

We know what happened to HMS Dunedin and we know where and when it happened.

In the time it has taken me to say these words, the three torpedoes were still making their way in the direction of HMS Dunedin as she zig-zagged away from the U-boat.

The men on board were going about their daily lives on one of His Majesty’s light cruisers. Some were on the bridge, still keeping a watchful eye; others were finishing lunch; others were serving lunch; some were just relaxing, trying to escape from the intense heat of the tropical sun.

Some were writing letters home; some might have been reading letters from home, perhaps for the umpteenth time as they tried to squeeze another ounce of news from family that they hadn’t seen the previous sixteen times they had read them.

The fortunes of war turn men into victims. Men, who were one minute going about their business and the next being propelled into a maelstrom of disaster. I have been speaking for about five minutes, the time it took two of the three torpedoes to reach the ship from the incredible distance of 4,000 metres. The third missed and so did a fourth, fired a few minutes later at close range.

Today we remember and honour the victims of the vagaries of war that beset HMS Dunedin, who, on that lunchtime in November 1941, was making her lonely patrol on a gentle swell in the South Atlantic.

Let me finish with the words of the Admiralty in January 1942: “HMS Dunedin has been doing most difficult and dangerous work with very little rest for everyone on board and was outstandingly efficient at it. We should all remain for ever in the debt of those who died that we may live.”

Click here to view the Order of Service (Word 2003)

At the same time, Bas Bowyer and members of his family held a parallel service at the HMS Dunedin permanent memorial at the National Arboretum, Alrewas

After the ceremony at the Southsea Memorial, most members went back to the Royal Sailors Club Home in Portsmouth for tea and sandwiches and a chat with the survivors and other veterans. Bertie, Jeffreys, our newest survivor, Jim Davis, Andrew “Boy” McCall, Bill Gill, Tommy Handley and Ted Hitchins, our newest veteran and who served in 1940, sat on the top table for a forum session.

Bertie kicked off the proceedings with an emotional and heartfelt speech and then the audience fired questions at the about their time on board and – for the survivors – their experiences when the ship was hit. At times, one could hear the proverbial pin drop as they told us of the the terrible things they had witnessed. 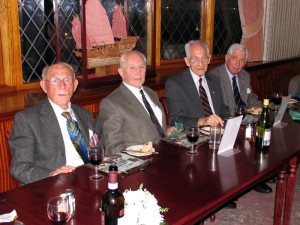