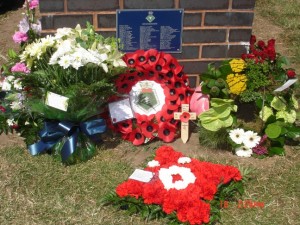 On 16 July 2006, seventy four members of the Dunedin Society gathered at the National Arboretum in Staffordshire to pay their respects to the men of HMS Dunedin and to meet our four remaining survivors. We were all privileged and honoured to have with us Arthur Binley, Andrew “Boy” McCall, Jim Davis and Bill Gill. Also among us were the family of another of recent survivors, Bert Cook, who, sadly, died earlier this year. His daughters Jane Pye and Lyn Withey, accepted on his behalf a glass plaque donated by Lykes Lines (the owners of the rescue ship SS Nishmaha).

The Society was pleased to welcome family members and friends of Dunedin’s ship’s company including a few brand new contacts. The weekend kicked off with an informal gathering of around thirty people at the nearby Fradley Arms.

Furthest travelled was Rob Macaulay, who came from Australia especially for the event. Rob’s father – Colour Sergeant Macaulay – was one of only three survivors, along with my father and Thomas Moore, on the first Carley raft to be found. Rob’s father, who died thirty years ago, had said very little about his experiences, so Rob was thrilled to come across DunSoc last November. Rob was clearly delighted to among so many other Dunedin people having known so little for so long. For me, the presence of Rob and his sister Jan and brother Martin (who live in England) was a true highlight which will stay with me for a very long time.

On Sunday morning, after opening presentations by Chris Broadway and me (click here for mine), the audience was treated to a Question & Answer session with the survivors, with Jim Davis giving us all a good laugh as usual with his tales of Dunedin mischief.

The centre-piece of the day was the ceremony of remembrance at the Dunedin Memorial in the beautiful – and ever-maturing – grounds of the Arboretum. We are extremely grateful to David brown for presiding over a moving service and to Bas Bowyer for arranging it with his usual skill. I must, as ever thank Anne Randall for all her tremendous efforts to put on the whole show and to Chris Broadway for his customary enthusiasm and guidance.

It was another wonderful HMS Dunedin Reunion.

Below is a gallery of photos from the day and the informal gathering the night before.