Could not join the Navy (probably because of bad eyesight); insisted on joining the NAAFI instead. Only 17 years old.

Albert’s niece, Karen, is a published author and in 2006 included the following touching dedication in her book “Star Wars Republic Commando: Triple Zero”

“For the ship’s company of HMS Dunedin, including my uncle Albert Edward Traviss, who died in the sinking of the cruiser on November 24, 1941 – a seventeen-year-old boy unable to join the Royal Navy because of poor eyeseight, but who insisted on serving as a warship’s NAAFI assistant instead, and so gave his life for his country before it had hardly begun.” 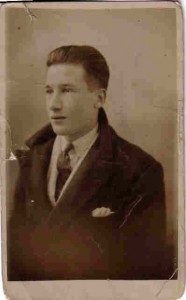 Leslie William Rowett b. 1913 Isle of Wight d. 24 Nov 1941 HMS
Dunedin.  He was the NAAFI canteen manager.  Les was married to
Katheleen and had two children David and Sheila.