It is with much regret that the Dunedin Society announces the death of one of the few survivors of the sinking of HMS Dunedin, Clarence Arthur Montague Victor Binley, who died at 02.55 on 28th February. He was 95.

Thanks go to Tommy Handley and Anne Randall (Lt-Cmndr Sowdon’s daughter) for these photographs.

“On board S. S. NISHMAHA as was recorded by the Master in his letter dated 16th December, 1941, C. Yeo. Sigs. Lavington, E. R. A. Hicks and P. O. Butler were of great assistance in tending the sick and injured. Yeo. Woods deserves to be added to this list.” 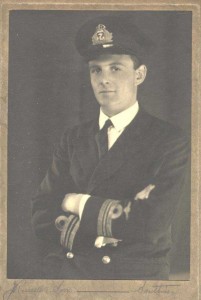 The discovery, in 2015, of his manuscript notes on how many men made it to the rafts prompted new research into the rescue of the survivors and the fate of some of the men who were lost.