After training at the RM Depot Deal, he served in Plymouth, Portsmouth, and in a number of ships, including HMS Hood, HMS Nelson and HMS Calcutta. He joined HMS Dunedin as a Corporal on 24th January 1938 and was promoted to Temporary Sergeant on 1st January 1941. He was Captain of the aft High Angle 4in gun and was probably one of the longest serving of the ship’s company. He was a member of the prize crew for one of the Vichy ships captured by Dunedin in 1941. 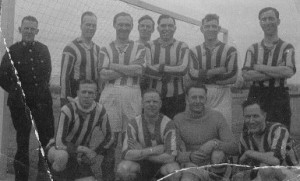 Though he managed to board a raft after the sinking he unfortunately did not survive the days at sea thereafter. Indeed, he gave up his place on a Carley raft on 24 November 1941 to let another man on board. He was last seen swimming towards another raft.

Sgt Allen’s wife was told by the Admiralty on the 9th June 1943 that she would receive payments owing to her husband for:

The first two sums she received on 20th July 1943, the latter on 1st November 1950….bureaucracy worked exceedingly slowly it seems.