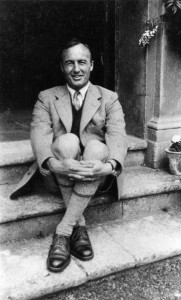 Edward (Ted) Unwin was born in 1905, and began a lifetime career with the RN when he entered RNC Osborne as a cadet in September 1918, as a member of Hawke Term. The Term moved to RNC Dartmouth in 1920, where he became a Cadet Captain. His first appointment was as a midshipman to the Emperor of India (1923-1925), serving in the Mediterranean, and he was also in the Mediterranean for his next seagoing appointment on HMS Ceres (1926-1927) where he reached the rank of Lieutenant. From this point onwards he began specializing in signals.

In the late 1920s he took advantage of the prevailing drive to get naval officers airborne, becoming an Observer with the Fleet Air Arm. This took him to the carriers Furious (1928-1929), Eagle (1929-1931), and Courageous (1931, 1933-1934), dividing his time between the FAA and signal duties on the carriers. On Eagle he toured South America as part of the carrier’s role in the British Empire Trade Exhibition, and it was also when on Eagle that the Spanish Government awarded him the Spanish Order of Naval Merit, for his part in rescuing a Spanish plane and its crew from the Atlantic.

In 1932 he went on the Long Signal Course at Portsmouth, culminating in exams in which he was awarded the joint highest mark, thereby earning him a share of the Jackson Everett Prize for Signals. This subsequently earned him the position as Flag Lieutenant (with additional responsibility for Signals and W/T) on HMS Glorious (1936) and HMS Courageous (1936-1937), serving on both carriers under Vice-Admiral Noel Laurence. He then served as flag officer (W/T) under Vice-Admiral AB Cunningham on HMS Hood during the Nyon Patrols of the Spanish Civil War (1937-1939).

The next two years were spent alternately in the Admiralty and as Flag Lt to Rear-Admiral RB Davies at the Fleet Air Arm Headquarters at HMS Daedalus, where frenetic attempts were made to get the previously underfunded FAA ready for action when war broke out in September 1939. Ted Unwin was promoted to the rank of Commander in December 1939, aged 34.

After another spell at the Signals Department at the Admiralty, he was appointed to HMS Dunedin in March 1941, as her Commander and Executive Officer, where he remained until her sinking in November 1941. He was one of the last to leave the ship, jumping overboard at the same time as Harry Cross (see History). Both Harry and another survivor, Thomas Moore, recalled him refusing a place on the rafts, preferring instead to ensure that others got onto the rafts first. He is known to have survived for some period of time among the rafts, but died before the 72 survivors were picked up by the Nishmaha.

Commander Unwin left a widow (Vivian, nee Stock), a daughter (Sarah), and a step-daughter (Elizabeth-Ann Margetts), the latter being the daughter of an FAA colleague killed in a flying accident in 1932. Any further information about Cdr Unwin can be gained from his grandson Daniel Morgan (see Links).