Thanks go to Arthur Williams’ grandson, Robert, for supplying the material on this page and the linked pages. 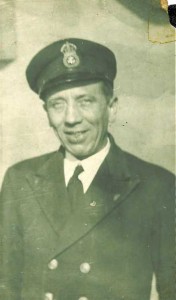 Click here for a gallery of photographs and here for an account of Arthur’s story, “Lost at Sea”, written by Robert in 1982.

Arthur Williams wrote several letters home while he served in HMS Dunedin, which you can read here.

The following Obituary Notice appeared in the “Boilermaker’s Journal” of Dec 1941/Jan 1942:

“Cardiff No 1 – It is with feeling of deep and very sincere regret that we record the death of Bro. A.J Williams, Reg No 99773 whilst serving on HMS Dunedin which was sunk by enemy action. The late Bro. Williams, who was a Chief ERA entered our Society on November 19th, 1917, as a first class member and had a continuous membership up to the time of his lamented passing. He was a very good and conscientious workman and a good trade unionist. For a certain time he held the position of Sick Steward in the branch which duty he carried out faithfully, being at all times attentive to his duty. Bro. Williams belonged to a family that had always been prominent in Cardiff No. 1 branch annals as his father , Bro. D.J Williams, with 50 years’ membership to his credit, is still following the trade. Both of Bro. A.J Williams’ brothers have held office in Cardiff No. 1 branch, one of them holding office as secretary of the branch. We, in Cardiff No. 1 branch regret the passing of a very good member, and to his sorrowing widow and children, father, mother, brothers and sister, we tender our very sincerest sympathy in their hour of trial.”

“Till the day breaks”