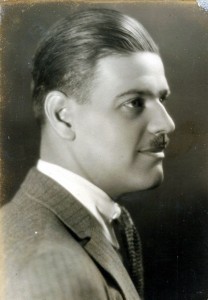 He came to Bermuda in about the year 1931 as an insurance agent, eventually joining the staff of Gosling Brothers as an accountant. He was for many years a member of theBermuda War Veterans’ Association and an accountant of the Headquarters Committee.

In 1935 he joined the Bermuda Volunteer Engineers, and at the outbreak of war in 1939 he was a corporal with his unit. Anxious to see action of some kind in the service of his King, he trained himself for service with the Royal Navy and his efforts were subsequently rewarded. He joined the Dunedin (in August 1940) at Bermuda and became Paymaster Lieutenant.”