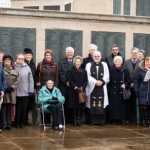 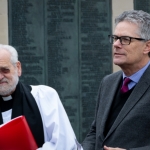 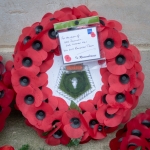 Reflections on our remembrance, by Stuart Gill, as expressed by him at the service

We remember the men who lost their lives when two torpedoes hit Dunedin’s starboard side around lunchtime on 24th November, 1941, sending Dunedin down within about fifteen minutes. Most of the four hundred and eighty men of Dunedin’s ship’s company perished, leaving only sixty seven survivors when a passing US merchant ship, SS Nishmaha, came to their rescue a few days later.

For the families and friends who did not come back, the grieving and the sorrow began and never ended – a process which took place largely in private and with no knowledge of what had happened. The coming together of the group like the one gathered at Southsea and the bigger group which became the Dunedin Society, enabled us to reveal the story.

Crucial to this was a small group of remarkable men – our survivors. Each of us in the Dunedin Society has been privileged to know these dozen men, who became the core of our Society.

In the case of my (and of my brother Michael, here in today’s gathering) father, Bill, it was only about twenty or twenty five years ago when he started to talk about his experiences on that fateful day and the days that followed.

Like so many veterans of war, it was only in later life that he and others began to open up.

I am glad they did. And so, I think, were the men themselves.

Seventy seven years after Dunedin went down, none of these men is with us now.

Seventy seven years after the events of November 1941, all the men of HMS Dunedin have gone.

But their memory lives on – through this group here today and through our wider Dunedin community.

This might be the last fully organised memorial event, but I know that in the years to come, people will still come here to pay their respects.

The memory of all the men of HMS Dunedin will live on.

The Order of Service can be found here

The Dunedin Society extends its immense gratitude to the Reverend Colin Noyce for, once again, conducting the service.