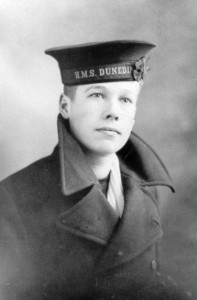 Click here for Charles’ “Memories of a Boy Seaman”

The entry below was made on 16 November 2003 on the BBC’s People’s War web site. ‘WW2 People’s War is an online archive of wartime memories contributed by members of the public and gathered by the BBC. The archive can be found at bbc.co.uk/ww2peopleswar‘

On several occasions during world war 11 I am sure that I had a guardian angel. I joined the RN as a 15 year old boy seaman 1937. After complete initial training at HMS St. Vincent Gosport, my class was drafted to HMS Dunedin a 1918 Vintage cruiser. This was to complete our training at sea, before joning a ship of the fleet. I was one of a class of 30 boys. Towards the end of training whilst working on the quarter deck, assisting lowering the quarter deck awning stanchions, two of the fingers of my right hand were broken (I still have the scars). I was confined to the sick bay for 3 weeks and was put back two classes on my return to Duty. My original class was drafted to HMS Royal Oak. Shortly after war broke out she was torpedod in Scapa Flow most of the boys aboard were lost including the whole of my class.

HMS Dunedin was torpedoed in the South Atlantic in 1941 with a great loss of lives.

I joined HMS Aurura early 1939 (a light cruiser)in April/May 1940 we were at Narvic Norway. My action station was a member of a twin 4″ AA gun one of four above the after funnel. Even after capturing Narvik we were continually under air attack. We had no air support, no let up at night in May as it never got dark. Aurora was hit during one of these raids – a bomb forward. It put out a third of our main armourment (I was aft) due to this she was sent home for repairs.

Jan 1941 I volunteered for coastal fores (torpedo boats etc). Not long after I left Aurora she was sent to the med, whilst their she was hit,this time hitting the 4″ gun deck. All the 4, 4″ gun crews were killed. Nearly 50 men all my friends.

At this time I was in the Med serving on M.L. (Sub chaser) stationed at Gib patrolling the “Straights” U boat hunting. Qualified as Leading seaman.

Took passage to Colombo on PO Liner Strathaird and joined Frigate HMS Idzabu, Sent to Darwin Australia as a Guard ship. Darwin was being bombed by Japs from New Guinea. After a month sailed to Brisbane then headed via different Island Groups in the Pacific to join the “Fleet Train”. A very large convoy of supply ships, Tankers, Ammunition, Hospital ship etc. Odzani was part of the escort sailing up and down the South China sea not far out from Japan. Our Pacific Fleet after bombarding Japan joined the Fleet Train to refuel etc and go back again. It was also the job of Escorts to take empty ships back to (usually) Eniwetoc or Ulithi for them to replenish and return.

At the time the Japs surrendered Odzani had just escorted two empty tankers to Subic Bay in the Phillipines, on refueliing she was sent to Hong Kon for the surrender. A very short break in Hong Kong then sent to Macao taking a very large barge full of rice. On return ordered to sea to ride out typoon at last some rest – no – sent hunting for Chinese Pirates off the Pear River – one month later set sail for UK