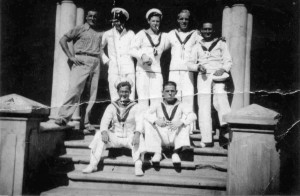 Photo taken in the Caribbean, 1940

Tucker Hall, son of Thomas Hall, wrote on 19 August 2009: I’m pretty sure the man standing back row, second from the right, is my father, Thomas W. Hall, RNVR.  He served on the Dunedin as a signalman and was transferred to Admiralty House, Pembroke, Bermuda when the ship called here.  He met & then married my mother, Joyce Dallas, on 20 August, 1942.  I don’t know that much about his war service (he would never talk of it) but I know that he then served on a minesweeper in the Mediterranean (possibly named the “Acasta”) before being demob’ed in 1946 and returning to Bermuda, where he lived for the rest of his life.  He was a photographer of some local note for many years before his eyesight failed.  He died in 1992, age 72, of natural causes.