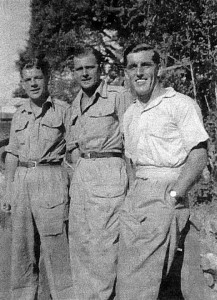 Richard Laland is on the right; Fred Hawks on the left.

Richard Laland served in Dunedin as a Boy before the war and went on to become one of the few survivors of the loss of HMS Barham the day after HMS Dunedin was hit. He wrote to the Dunedin Society in 2006 with the following information about his wartime experiences. The “Fred” to whom he refers is Fred Hawks.

I was very interested in your article in the Ganges gazette about HMS Dunedin having spent seven months in her 1937-38. I joined the RN Jan.’ 37 at Ganges and was drafted from there to the Dunedin  Oct.29th.’ 37. At that time the Dunedin was used as a boys sea going training ship, spending most of our time exercising in the Solent. After scrubbing decks at 0630 every morning, have breakfast and change into the “rig of the day”, then prepare to set sail. We would ” let go fore & aft” at precisely at 0900 every morning and return at 1600 but not if the weather was bad or foggy, the reason being we all had to have a turn at steering the ship (helmsman) and I don’t think they would risk us boys in bad weather. One of crew always took the ship in and out of harbour. Of course there were several other things we were trained at 1 “away sea boats crew “, lowering the cutter, manning it and hoisting it back onboard. 2 “close up for action stations”, loading and unloading the 6in gun. When were proficient we were allowed to fire dummy shells at a target. 3 splicing rope and wire hawsers but never the “mainbrace”. 4 signal and seamanship classes but when in harbour on bad days, the teacher would take for education. Towards the end of our time we had an educational exam to see whether we were bright enough to become P.O’s when the time came. However, come May 1938 the battleship HMS Barham “tied up” on the opposite of the jetty to where the Dunedin was berthed, she had just returned from the Med. and on the 24th May all us boys were drafted to her but not before we were all promoted to 1st class boys.(2nd class boys were not allowed to go to sea in a fighting ship). When we arrived onboard the P.O instructor said ” you can dry your eyes because this is your home for the next two and half years” but for me it was three and a half years, I was in her until she was sunk and was a day after Dunedin.
Some years later (Feb.’45) I joined HMS Carysfort (another N.Z. name) and in that ship was a survivor of the Dunedin name Fred (sorry can’t remember his surname), he was the yeoman of signals but must have been a signalman on the Dunedin. He showed me all the bits of flesh he had missing on his legs, he said he was bitten by barracuda’s every time he had to take his turn outside the boat. It must have been devastating for those crew members because it was some time before they picked up. I lost touch with Fred when the ship “paid off” in 1946.