Around one hundred people gathered at the Southsea Naval Memorial and at the Royal Maritime Club on Saturday the 24th November for a combined Remembrance Service and Reunion. Thirty six members of the ship’s company were represented by relatives.

In reasonable weather – dry, but a touch windy – everyone assembled at the Memorial in our annual tribute to the men who lost their lives when Dunedin went down. The bugler sounded the alert at exactly 1320, signalling the start of proceedings at the very moment that three torpedoes were fired from U-124. For the next few minutes, Stuart Gill addressed the crowd to welcome new members, say hello to some old friends and to set the context for the day. He finished at approximately the time that two torpedoes hit Dunedin. William Gill, the President of the Society then recited the Exhortation before the bugler sounded the Last Post. After two minutes’ silence and the sounding of the Reveille, Andrew (Boy) McCall recited the Kohima Epitaph. William Gill then laid the first wreath, pictured (click for a bigger image).

Click this image for a bigger picture of Dunedin Society members at the Memorial.

Back at the Club, members mingled and chatted over lunch before a more formal session of presentations and discussions. Stuart Gill gave a presentation entitled “HMS Dunedin and the Enigma Secret” outlining the effect that Bletchley Park’s breaking of the German code had on Dunedin’s movements in the South Atlantic in 1941. Bertie Jeffreys, one of the survivors made a wonderful speech in commemoration of the men of Dunedin (text to follow here) and, to a hushed audience, William Gill read out a poem he had written himself about Dunedin (click here for the text). Anne Randall added an interesting piece about how some Wrens came aboard Dunedin in Plymouth in spring of 1941 to help get her ready for sailing in a hurry.

The meeting went on into the evening over dinner until the final stalwarts of a wonderful day drifted away some time after midnight.

Thank you to everyone for making this another very special Dunedin occasion. Anne Randall tells us about the Wrens and Dunedin 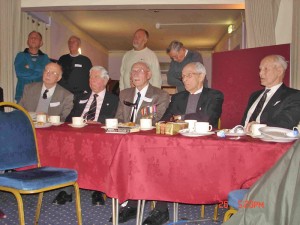 our survivors and others listen in. 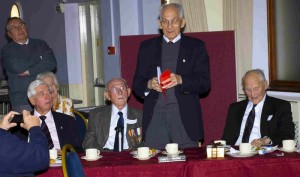