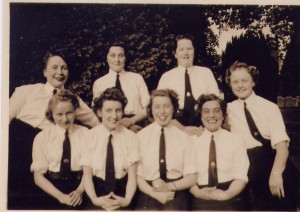 CPO Sandy Holland was one of the first six women to join the WRNS in May 1939 and was later stationed at Devonport. She remembers Dunedin in dry dock in March/April 1941. She recalls that the ship was urgently needed even though she wasn’t ready, so it was essential to “turn the boat around” very quickly. To help, she and some other Wrens went on board Dunedin to the ship’s office to help with the paperwork for three days so that the ledgers could be landed before Dunedin sailed.

Having been aboard Dunedin and knowing a number of the Plymouth-based ratings, Sandy took a special interest in Dunedin when was lost. Indeed, she sent many of the telegrams to the families of the Plymouth ratings.

Sandy is pictured, second from left, front row. The caption on the back reads:  ” The Casualty Office WRNS taken about 1942 who dealt with HMS Dunedin Devonport ratings in 1941″