Harry Wooley is Second from left in the front row. 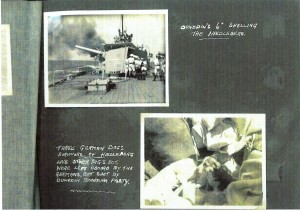 A sample from Harry’s Photo Album

Harry Woodley joined HMS Dunedin in 1939 and survived her sinking. He was part of the prize crew that took over the captured German merchant ship, Hannover, in March 1940 in the Caribbean.

After the war, Harold wrote about HMS Dunedin and her sinking. I am grateful to his daughter, Carolyn Woodley, who generously made his original account available to the Dunedin Society. At the time of writing, we have what appears to be the first half of his account. We hope that the rest of it will turn up too.

Over the next few weeks I will be uploading Harold’s account in segments. Click on the links below.

Part Two: Concert Party and Preparing to Leave Freetown for the last time