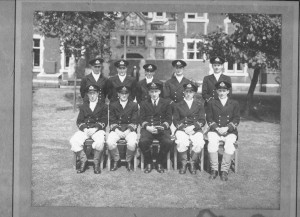 Bruce is Second from left, Back row

The entry below can be found on the BBC’s People’s War web site. ‘WW2 People’s War is an online archive of wartime memories contributed by members of the public and gathered by the BBC. The archive can be found at bbc.co.uk/ww2peopleswar‘.

“He was in the RNVR The first place he went to was the Cloch in Gourock much to his disgust at the beginning of the war and after that he was sent to Portsmouth I think it was where he did a six month gunnery course — so he was the gunnery officer on the HMS Dunedin. One of the last things that they were very fed up with was they never got very much mail — their last home port was Freetown which a pretty stinking place — they didn’t like it. Bruce went away in the beginning of April and the first time they got any letter from home was 27th June — a long time for all the men on the ship so they were pretty fed up. Bruce never got home once from his time of joining the Dunedin — he didn’t get a chance of leave.”
Edith MacKay Pow b.1920

“They never told you anything — just to say that he was missing. They were very scared that the Germans would be aware that the Bletchley Park folk had got around the secret code so they weren’t going to tell us anything — where the boat was, what happened to it.. nothing.

Some time after it someone told us that some survivors were being landed at Gourock and I went down with Bruce’s wife but the chaps came off, it was dark and it was raining and they were kept well away from us and went straight onto the train. It was awful.”
Edith MacKay Pow b.1920

Edith didn’t find out exactly what happened to her brother till a book was published some fifty years after the Dunedin was sunk.