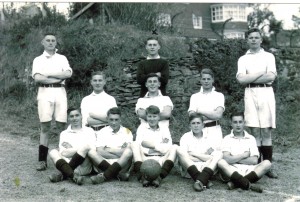 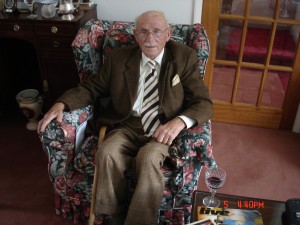 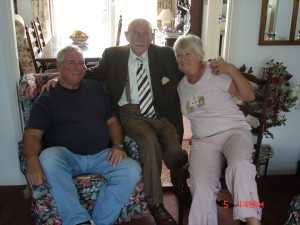 Bertie with his good friends John and Heather Marsh, in September 2006 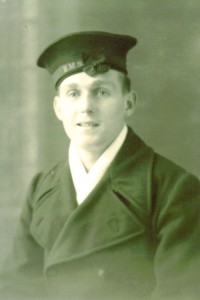 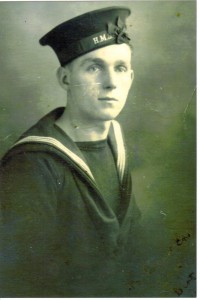 Bertie Jeffreys joined HMS Dunedin in 1938 as a Boy sailor and stayed with her until her end in November 1941. In that time he experienced everything endured by Dunedin and was part of the prize crew that took over the German merchant ship, Hannover, in the Caribbean in March 1940. And he even appeared with Noel Coward as an extra in the film “In Which We Serve”!

He was below decks when Dunedin was hit by two torpedoes on 24th November 1941, but scrambled up to the starboard side of the main deck and jumped into the water to find a Carley raft. Bertie was badly bitten by fish (but remembers batting a shark over the head with a paddle!) and was one of only three survivors left on his Carley raft when he was rescued. This was probably the second or third raft to be rescued by SS Nishmaha (see also Rafts and Rescue).

He spent several weeks in hospital in Trinidad before returning to England in early 1942.

In recent years, Bertie became a cherished member of the Dunedin Society and always enjoyed talking to the members about his time on board HMS Dunedin. Sadly, Bertie died on 15th October 2010. We all miss him.

The Dunedin Society is extremely grateful to Bertie’s good friends and neighbours, John and Heather Marsh for having brought Bertie to us.