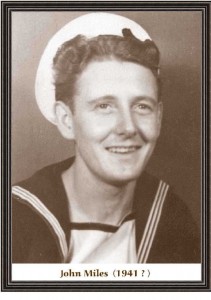 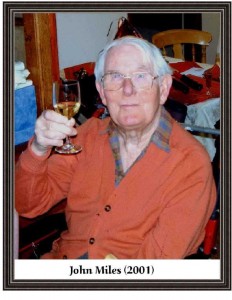 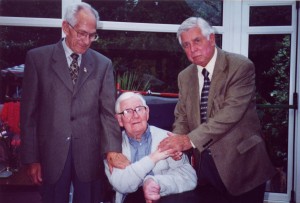 Three survivors together in 2002 – left to right, Bill Gill, John Miles and Jim Davies; John and Jim were on the same raft.

It is with great sadness that we have learned of the death of our fifth known survivor, John Miles. He was the most recent survivor to surface and provided us with a vivid description of the sinking – he was on the upper bridge, leaning over the side just above where the first torpedo hit and described it as an unbelievable noise that went right down to the base of his stomach, and soaked the bridge with a deluge of water. The ship then very quickly started to go over and he climbed over the “High side” of the Bridge to go down a deck but when he was climbing down the second torpedo hit, down aft, and it shook him off and dropped him onto the railings of the Lower Bridge, so that he thought he had broken his ribs.

John was involved with most of what happened to Dunedin during his time in her, and was to have his first contact with a casualty when one of the Cooks went sleepwalking when the ship was in Bermuda Dockyard, and had to be recovered from under the ship . He was in both the Boarding Party and then the Towing Crew during the capture of Hanover in March 1940 (and gave a stirring description of the liberation of five bottles of Champagne from the saloon by the Towing Party when the ship was under tow. He left us with an equally vivid description of the arrival into Jamaica, with the whole docks area black with cheering people as Hanover was towed in, flying the White Ensign above the German Flag.

When Dunedin was trying to get the gold in the French Ship Emil Bertin landed at Martinique, and had been ordered to use force if required, John remembered having to shower and change into clean clothes, and scrub the Mess deck ready to take the expected casualties , and then the relief when it did not happen. He also remembered how friendly the French were when Dunedin went into the Harbour, not realising their original intention had been to go in and sink everything in sight.

In recent months John was reunited with Jim Davis, another of the Dunedin Survivors, who had been in the same Carley Float with him and had lived on the same Mess deck. John recalled the relief that he got from having salt water poured onto his back to try and ease the pain of the Portugeese Men of War (a deadly stinging Jelly fish) that had drifted down through the rafts, and whose stings had driven some men close to the brink.

Finally it is the enduring memory of a member of the Dunedin Society who was lucky enough to be present when three of the survivors, including John, were together to have heard a very everyday discussion between the three of them on how to deal with sharks trying to get into the rafts – you hit them over the nose with a Carley Float Paddle – and as John said “They were not very big, about four to six feet long”

John’s son, Richard, can be contacted on [email protected]