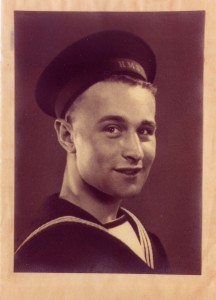 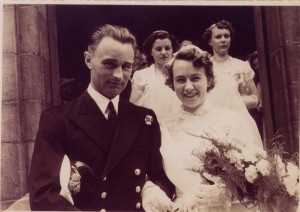 Thanks to Cliff Rainbow for the following biographical notes on Robert Rainbow, July 2006:

Bob was born in Billericay in Essex on 5th.December 1922.
Shortly afterwards the family moved to Hightown in Luton in Bedfordshire.

In 1930 the family moved again to Barton-le-Clay a village 6 miles north of Luton where bob continued his education at Manor Road school.

In 1933 he attended Luton Modern school until July 1939 when he left to take up a post as a clerk in the Railway Goods Warehouse of the LNER at Bute St. station in Luton.

Late in 1939 he volunteered for the Navy as a hostilities only rating at HMS Pembroke (Chatham Barracks).

As an Ordinary Seaman he was drafted to HMS Dunedin which was torpedoed and sunk by a U-boat. He survived and was rescued and repatriated.

He was rated up to Able Seaman and drafted to HMS Despatch until she returned to Chatham in 1943.

He was drafted to HMS King Alfred a training establishment for temporary officers at Hove in Sussex.

He was commissioned as a Sub Lieutenant and appointed to HMS Sirius until mid 1945 when she returned to Chatham.

Promoted to Lieutenant he was appointed to the brand new HMS Superb as a divisional officer until late 1946 when he became due for demob.

Bob took up employment as a chemist in a local chemical processing plant in 1947 and in 1950 he married a Belgian girl Christianne who he had met in Antwerp while serving in HMS Superb.

They had a daughter Ingrid in 1954 and soon afterwards moved to a new chemical plant in Warrington.

They moved to Antwerp in about 1960 when Bob joined the heating & ventilating business owned by his father-in-law.

Bob suffered a fatal heart attack while on holiday with his wife in Western Australia on 11th. November 1995.

His ashes were scattered in the harbour at Freemantle Naval Base.

He is survived by his Wife, Daughter, Son-in-law and Grandson, all in Belgium.