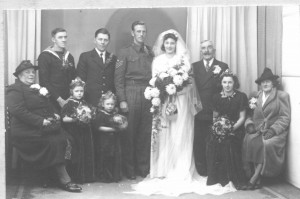 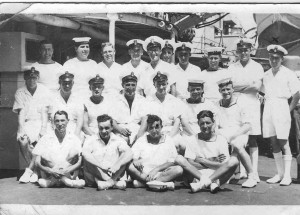 George Baker, Back row, Far right on board Dunedin 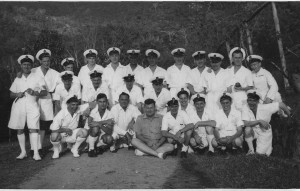 
I am grateful to George Baker’s niece, Cherie McLean, for this picture and for sending me the following e-mail in December 2004:

I have been doing my family history, on my mothers side, and my uncle George Charles Baker was Petty Officer/Shipwright on the Dunedin when she was torpedoed. Luckily for him, he had a toothache and was having a hot cuppa to help sooth the pain. He went up on deck after leaving the area, the officers mess I think, to cool his drink. Then just moments later the torpedo hit. He was in a raft for a few days without food or drink when he was picked up. He was then taken to Gibraltar, where my grandad, Uncle George’s dad, George Baker a stoker from HMS Diadem had also survived a torpedo attack. The doctors thought it quite funny when they realised they had 2 George Bakers in the ward on the same day, and to top it off, another uncle, John Baker, arrived on the ward to start work on the same day. This is the story as we know it.